March is usually one of the best months for Powderchase, resorts have a great base and there are still many cold fronts left in the powder bucket. But this winter has been everything but usual. After a not so easy decision process, we have decided to start our chase towards South Tyrol. As it had some of the best snowbases, good precipitation in the past 7 days and only sun in the forecast for the Powderchase weekend.

It probably was one of the smallest Powderchases in the books, lead by the one and only Bas, the founder of Powderchase who has been “out of the business” for a couple of years now. On Thursday evening the group met up in Canazei, a small south tyrolean town, right at the bottom of some of the most spectacular mountains in Europe. 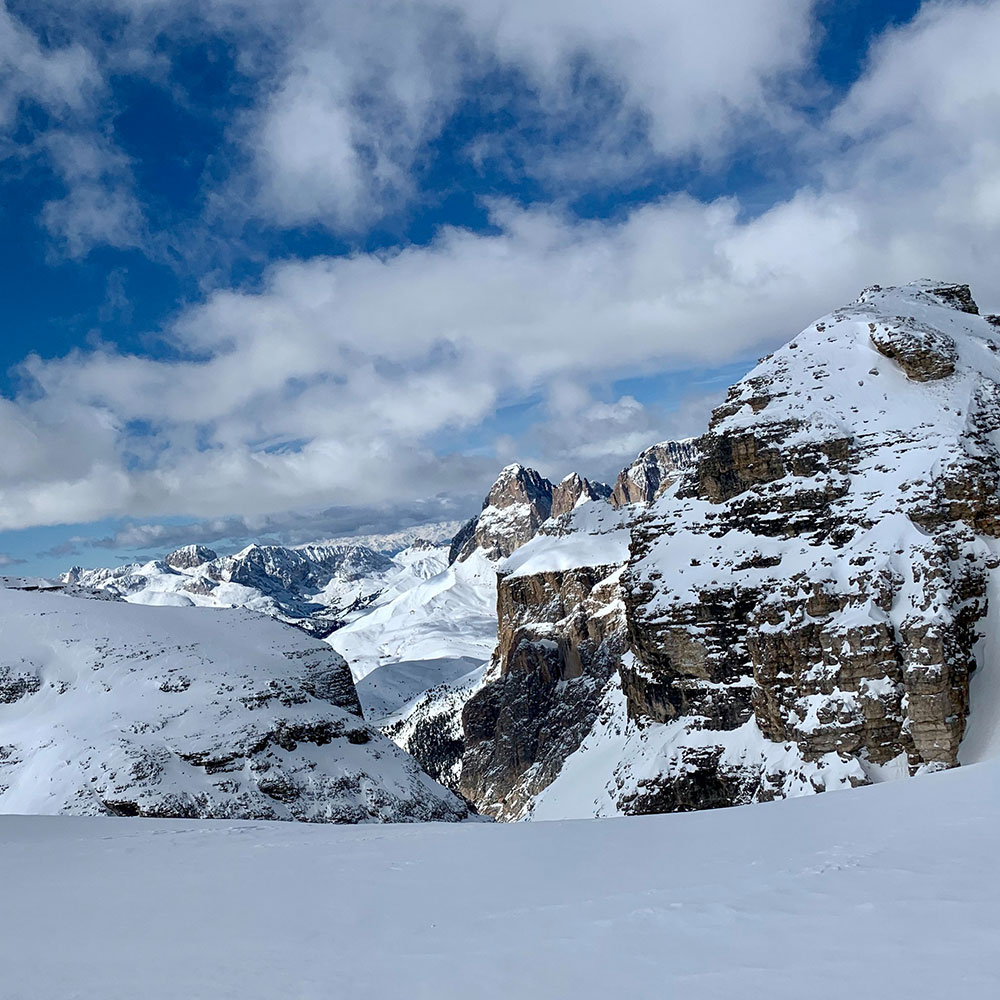 Due to weather conditions – 3 full days of cloudless skies – we have decided to spend Friday and Saturday chasing, and use Sunday as our cooldown day instead. Friday has started just as you’d expected it, with 10-15 cm of fresh snow we’ve got over night, and no clouds on the horizon – the best ingredients for your typical Italian riding. After carving the first lines into sparkling fluffy snow, we knew – it’s going to be a good day! The mission of the day was to cross the ski resort to Arabba and do a little bit of skinning up and traversing around the back side of Padon with the famous Marmolada face as a backdrop. And of course, do that one thing, that Dolomites are famous for! Ride some goddamn couloirs! 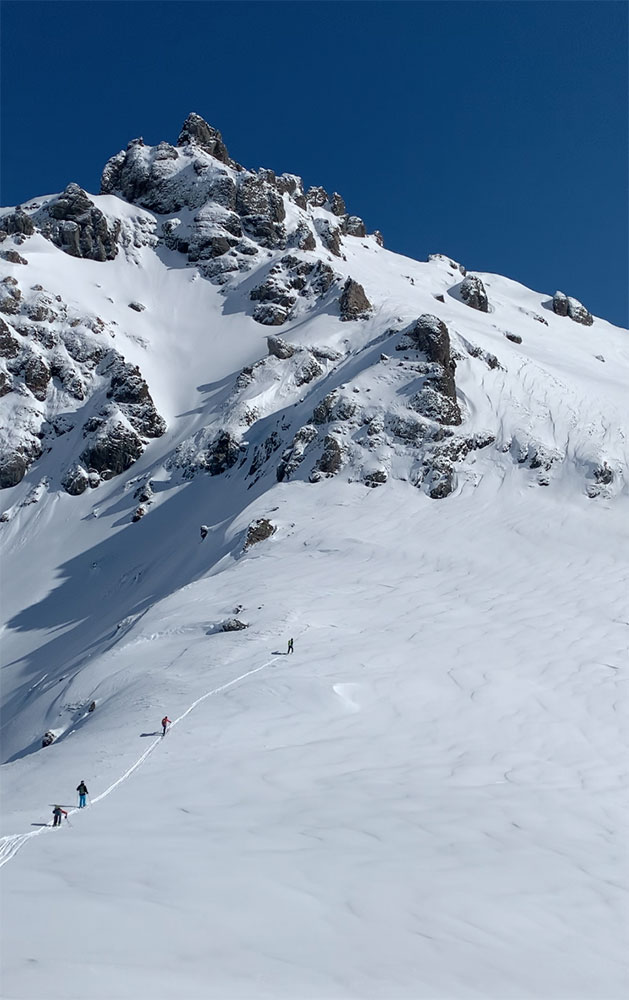 After initial difficulties with a lost pole at the top of the couloir, we have made it down to village of Ornella, the over 1000 meters deep descent had it all. A challenging coulloir packed with untracked snow, bouncy meadow and a steep forrest with beautiful playful terrain ful of stomps to jump over. The shady east-side of the mountains did not disappoint! After this, we have treated ourselves with a nice Italian panini/pizza/foccacia an made our way back to Canazei through the staple run starting at the top of Sasso Pordoi. 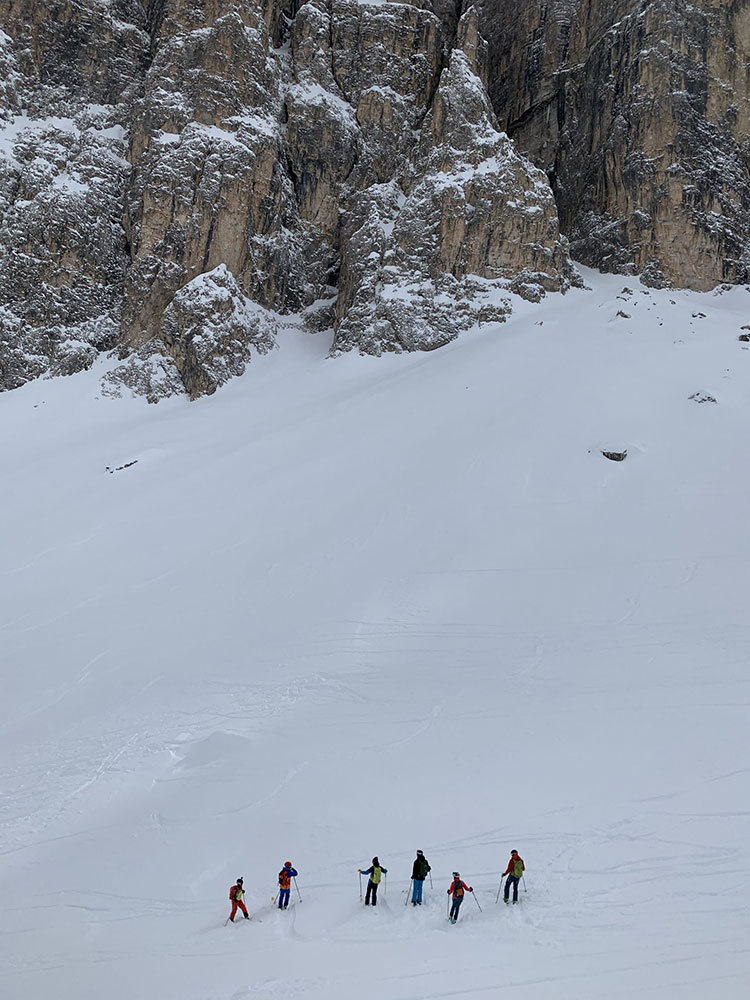 The hotel has filled our bellies with amazing dinner, but we had no time for big parties nor Apreski! Time to hit the hay early, to recollect as much power as possible. After seeing how vast the lanscape of Dolomites is (not called Suprski by an accident), we knew that there is still plenty of unridden powder waiting for us on Saturday. So we have started, where we’ve left off the day before – on Sasso Pordoi. Together with many enthusiastic mountaineers, euipped for what looked like Steep and Deep, we have enjoyed our first coffee of the day on top of the massif, and waited off the first wave of people to pass. 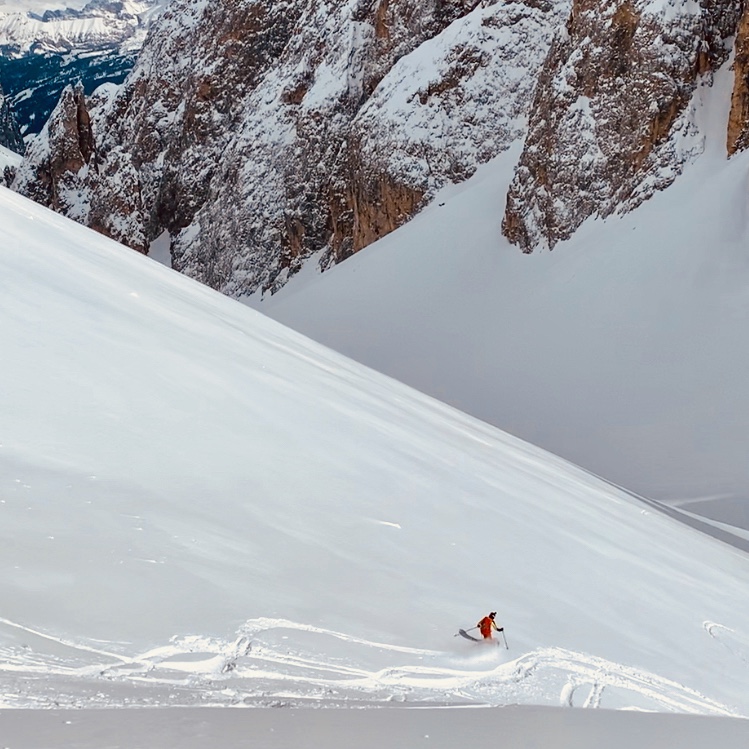 After a small tour on top of the Sella Ronda massif, traversing just below the Pitz Boe, we have dropped down to Val de Misde. Surrounded by limestone towers, the group was in complete awe of the beauty of this region, just imprinting the possible runs into their brains, in case they can make it back sometime – the potential of the Sella Ronda massif is endless. We have made our way down to Mesoles and went back to Arabba for some delicious lunch at a local bistro. We have spent the rest of the day on the similar side as on Friday, collecting some deep fluff in the forrest above Renaz. Few pole searching and participant-digging actions and singing in the forrest were part of the plan. 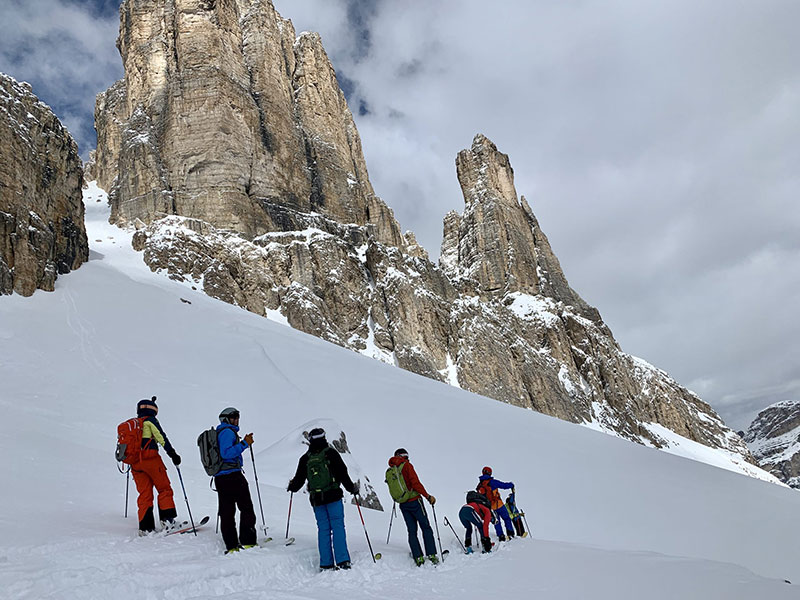 We finished off the two spectacular days in a local pizzeria, because you can’t go to Italy and not have pizza! But still hungry for the one must-do of Dolomites, the evening was spent well with few beers and early departure to our hotel rooms. Sunday was a “warump/cooldown” day, some people have left, but some still made the most out of it. So we rode Marmolada, top to bottom, tracked but still packed with amazing snow.  All good things must come to an end – and even thought everyone would like to stay a little bit longer, enjoy the sun and the local vibes, we had to say good bye. 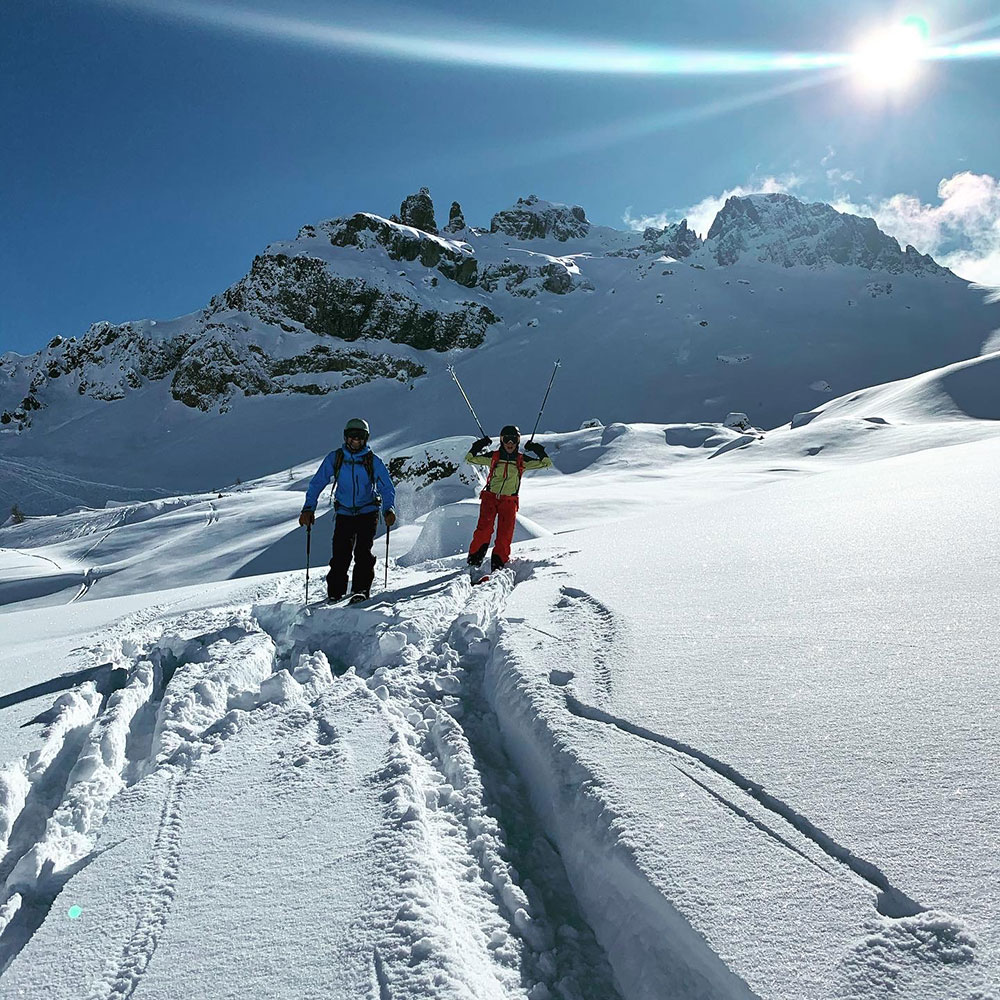 Thanks to Powderchase for showing the most beautiful side of the region and letting us experience Amore Dolomitico to the fullest.

We use cookies to ensure that we give you the best experience on our website. If you continue to use this site we will assume that you are happy with it.