The weather forecast for the second January weekend was everything but easy. After a massive dump end of November there hadn´t been any snow for the past 4 weeks. Snow was in the air but the question was – how far up would we have to go? The freezing level was predicted around 2200m.

To be sure to have enough possibilities our decision fell on Engelberg. A classical “north west stau” area in the central swiss alps with lifts up to 3100 m.

When we arrived in Engelberg at 1200 m is was pouring rain. Still the Powderchasers – as always – kept up the great spirit and we had a nice evening at a more “trucker babe” style restaurant.

The next morning our slowderchasers left with their local guides while the regular powderchasers went for their warm up day. We were surprised by the work the wind, warm temperatures and rain had done in the last 48 hours. The base (which was really good at the beginning of January) was pretty thin. After the sun came out it felt more than spring skiing instead of a mid winter Powderchase!

We waited at the Titlis Bergstation until the sight cleared up and were rewarded by a great scenery and pretty good snow around midday! The runs down the glacier were very nice – only the lower part was crusty and heavy. After three runs of 1500 hm the legs already felt a bit tired and we summed up the day in nice atmosphere on the Talabfahrt. 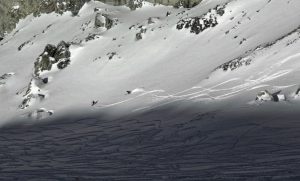 Since we always believe that being flexible is extremely important, we switched our original plan for the next two days. All three Powderchase Groups were made “tourable”. With not tooooo much effort, we reached a very nice Col and had a great run down to the Obertrübsee. The snowboarders had quite a bit of hiking and traversing effort but the big smiles on their faces were the proof they liked it! 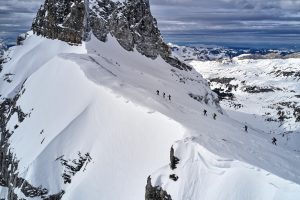 In the evening we were shuttled by a local bus company to “The end of the world”. The restaurant served us swiss cheese fondue and good wine and everyone very much enjoyed it! The party folk ended up in the hotel lobby….everyone was surprised “how much alcohol” all the rooms had brought along! No wonder with the swiss francs! 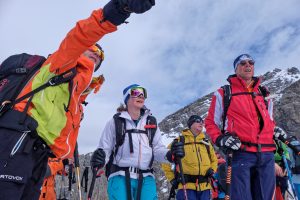 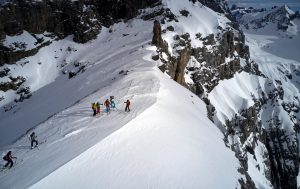 It was a very special weekend! A lot of effort on the organizational side but VERY much rewarded with happy and thankful clients!

Looking forward to more snow on the next Engelberg mission!